An electric skillet and a griddle are both ideal items to use in your kitchen to help you prepare meals. However, the two gadgets are similar and maybe tricky for you to choose the best among them especially when purchasing them.

If you are looking forward to knowing the difference between the two kitchen appliances, then you are at the right place.

With keen observation, it is possible for you to tell the difference between them. Additionally, you could understand the functioning of the two appliances and pick that which meets your needs in the best way. The price that each appliance goes for could also help you tell between the two.

Below is comprehensive information about both an electric skillet and a griddle. Read on to understand the difference between the two and the ideal appliance to invest in.

What Is a Griddle

In a gist, a griddle can be defined as a piece of cooking equipment that has a flat cooking surface and a heat source underneath. It is a kind of cookware; for instance, such as a cast-iron griddle or nonstick which is built into a range or cast into a burner. They have a large surface area, thus making them ideal for cooking for a crowd.

Unlike the majority of other kitchen cooking appliances, there are no sides in a griddle, which makes it easy to flip food when cooking in it.

What Is an Electric Skillet? – The Definition

An electric skillet is a frying pan that doesn’t require the use of a stove top oven.  It features an electric heating element in the pan so it can be used independently from a stove. An electric skillet also incorporates a temperature controlled thermostat that provides  a controlled cooking temperature.   Electric skillets are great for cooking small meals, and are an excellent alternative to having to heat up a whole oven.

Electric Skillets come in a variety of shapes and sizes.  Most are about 10-16 inches in diameter and can be square, rectangular, or oval. When picking a size think about what kind of meals you cook, and how much counter space you have to work with.  Also check the wattage of the electric skillet you are planning to buy.  Some models will cook at higher temperatures than others so make sure you get one that will provide you with enough heat to cook whatever it is you will be cooking.

A basic electric skillet will include the skillet, a lid, and a removable temperature controlling power cord.   Higher end models come in stainless steel, have a glass lid, drainage spouts, non stick coatings, and locking lids.  The advantage of the glass lid is that you can see your food cooking without having to open the lid, therefore keeping the heat locked inside and not interrupt the cooking process.  Drainage spouts allow you to safely and easily pour out broth, grease, or whatever you are cooking in.  A locking lid is great if you plan on moving the electric skillet from the kitchen to the dining table.

Cleanup of an electric skillet is very quick and easy.  Most are dishwasher safe, but make sure yours is before 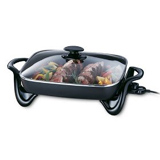 placing it into the dishwasher.  Simply remove all food from the electric skillet, unplug the temperature controlled power cord, and place it and the lid in the dishwasher.  If it’s not dishwasher safe they can be easily washed in the sink with a mild soap.  When done washing make sure the entire unit is completely dry then place back in the cupboard until it’s time to cook your next meal.

For instance, it has a nonstick surface which is coated to ensure precise heating of food and prevent burning of the cooking food.

The keep-warm area can also be used to keep the food from becoming cold for a while. An electric skillet is also the kind of gadget that is designed in a way making it possible to prepare a variety of foods. Therefore, when you have this, you will not need to use your oven or traditional stove from time to time.

Basics of A Griddle

A griddle, especially an electric griddle, has a large flat surface which is heated using an electric source of heat. The griddle heats evenly and maintains the heat throughout the cooking process, which helps avoid hot areas in the pan. Additionally, a griddle has more surface area as compared to a normal pan. For this reason, it is possible an easier for you to prepare a lot of food in a griddle as compared to what you can do when using a traditional pan.

Electric griddles are ideal for preparing a variety of foods. Some of the foods that you can prepare using a griddle are such as scrambled eggs, French toasts, and pancakes, among others. The flat surface of the griddle makes it possible to prepare such foods among other breakfast foods as it is easy to flip. A quality griddle has a nonstick surface which is durable and helps avoid scratches. Additionally, the nonstick surface help avoid burning of food when you are cooking it. It is also possible for you to place your dishes in a convenient warming tray underneath when you have large meals.

Advantages of Using a Griddle

Basics of an Electric Skillet

When you own an electric skillet, you are a lucky owner of a gadget that can help you prepare a wide range of meals quickly and easily. This is a kitchen appliance that can be used to prepare many dishes such as sauces, baked eggs, hamburgers, and chips, among others. It is also manufactured using high-quality construction materials and will, therefore, serve you for a long time without having to replace or repair it. As its name suggests, the electric skillets are plugged into an electric outlet to produce heat. The skillet is also a handy device and can, therefore, help you free up space in the kitchen, unlike the case of an oven or a stovetop.

The electric skillet has a feature of temperature control, which is better as compared to that of an oven or a stove. It is a quality and reliable equipment that you can use in your kitchen when you need a break from your usual pan or oven.

How to Cook Using an Electric Skillet

This is a method of browning the ingredients using little oil or fat or boiling them with fat.

This is a method where you use a small amount of grease and oil under fast and medium heat.

This is a method involving dry and wet heat. It involves searing food under high temperature. Later, you cover the food with a lid and leave it to cook under low temperature.

Advantages of an Electric Skillet

Disadvantages of an electric skillet

Other comparisons of an electric skillet and a griddle

A griddle and an electric skillet are both ideal cooking appliances that you can use to help make cooking easier. However, choosing one among the two appliances is not a piece of cake. Nevertheless, when you have the features and qualities, it is easier to make an ideal decision. Use the information above to help you pick the cooking appliance that will help bring your kitchen experience to a new level.

Related Articles
We will be happy to hear your thoughts

What Can I Cook in an Electric Skillet?

What Can I Cook in an Electric Skillet?

KitchenOrb.com (this website) and its owners are participants in the Amazon Services LLC Associates Program, an affiliate advertising program designed to provide a means for sites to earn advertising fees by advertising and linking to amazon.com or myhabit.com.